Internationally-acclaimed Occidental Gypsy plays an exhilarating blend of gypsy, jazz and folk music that enraptures the listener with a complex acoustic sound, burnished by smooth vocals reminiscent of the first era of swing. Their pioneering approach to gypsy music pays homage to Django Reinhardt and expands the genre to include elements of western (Occidental) sounds and rhythms, including blues, Klezmer and Latin.

Their original compositions are deeply complex and challenging to execute, and are often considered a “natural evolution” of Reinhardt’s sounds were he still alive today. Their energetic shows have garnered them fans among the most discerning musicians, and new gypsy lovers alike.

“OG” has played to packed houses at the legendary Nighttown in Cleveland, Green Mill in Chicago, Jazz Kitchen in Indianapolis, World Cafe Live, Old Town School of Folk Music in Chicago, Bluebird Cafe in Nashville, The Ark in Ann Arbor, the Blue Wisp in Cincinnati and many others. 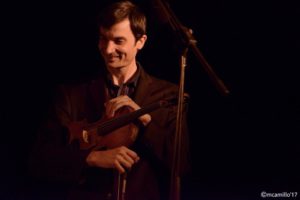 Two strings hearkens the sounds of a small symphony, summoning to life the spirits of Occidental Gypsy’s original compositions which pay tribute to their heroes such as Paula May,  Messalina, and Rudolph Vrba — a man whose tremendous efforts in the face of darkness bring inspiration to all who hear his story.

Derek Pell has played with the renown Ray Price and John Jorgensen, and occasionally joins OG for special concerts. 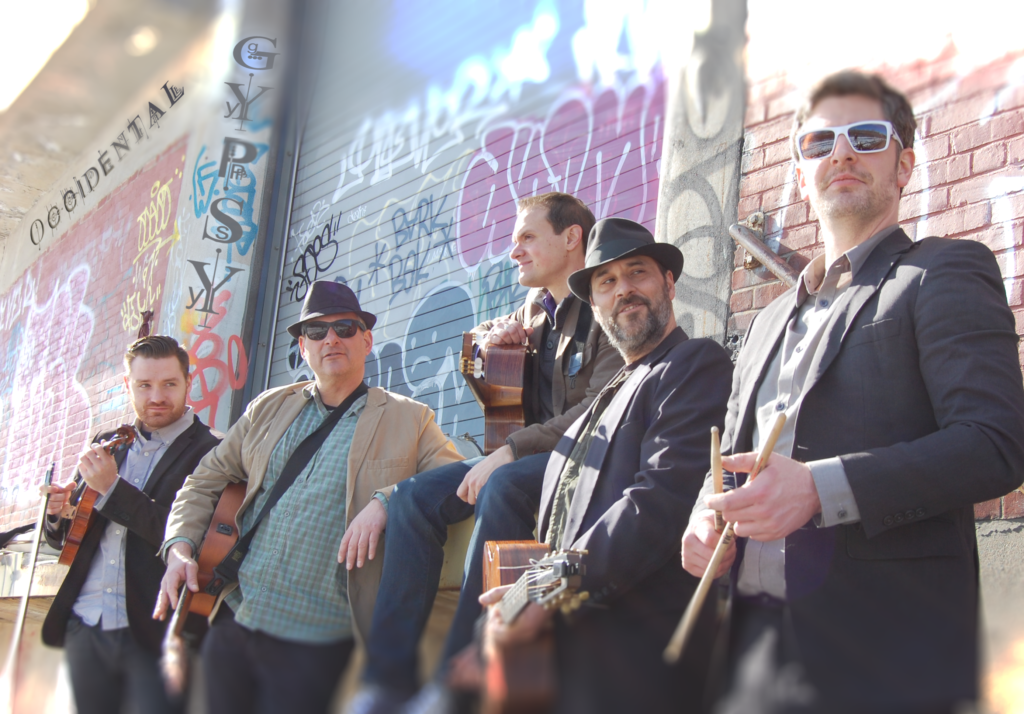 DR. LONNIE SMITH says “I love Occidental Gypsy’s new CD 44070. The compositions and arrangements are uniquely creative. They perform with enormous heart and soul and have an original groove that is definitely worth checking out.”

HARTFORD COURANT says “As it journeys from venue to venue throughout the United States, Occidental Gypsy, a red-hot, Django Reinhardt-inspired, gypsy swing and fusion band, loves to encourage rapt listeners to get up on their feet and dance to its classically retro yet forever young sounds.”

Don Heckman of the LA TIMES says  “…irresistible, a virtual definition of an era when jazz was often described as “hot” music.  Occidental Gypsy’s rhythm section, usually driven by the surging rhythm guitar of Brett Feldman, hit one irresistible rhythmic groove after another, “hot” was the best applicable adjective.”  read full review

CHICAGO TRIBUNE says  “…  sonic pleasures to be had, particularly in an energetic, gypsy-jazz transformation of Duke Ellington’s “It Don’t Mean a Thing (If It Ain’t Got That Swing),” which opened the evening. More than once, vocalist-guitarist Frantz brought the large crowd to near silence through the warmth and openness of his singing, as in “Georgia on My Mind.”   read full review

DJANGOFEST PRODUCER says “Occidental Gypsy is a crowd-pleaser.  Jaunty vocals, lots of swing, and evocative violin and guitar interplay make this an act to catch and enjoy.   They were a big hit at Djangofest Mill Valley ’15.”  – Nicholas Lehr – Executive Producer 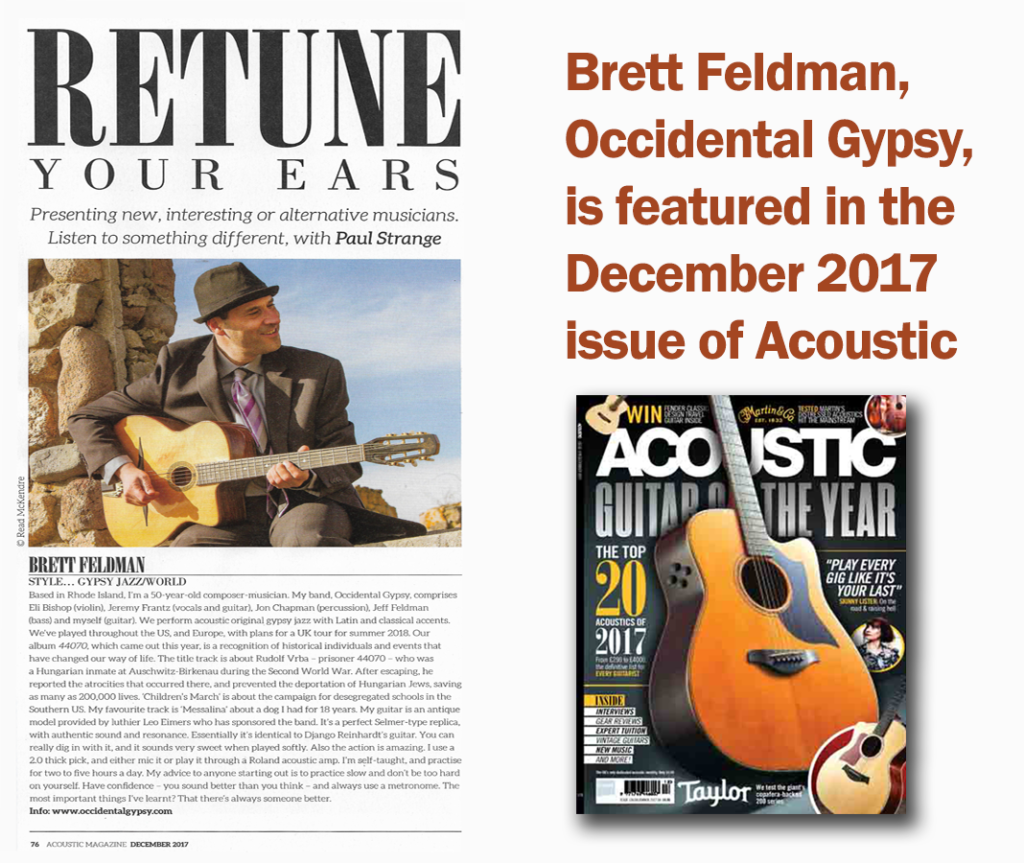 “Occidental Gypsy did more than put on a thrilling show that earned our first-ever double encore. They led a series of instructive and fun workshops that gave everyone – beginners, advanced musicians, and even listeners new to jazz – an education and a chance to make better music.”
– Mark Schaffer – Programming Chairman for The Folk Project Acoustic Getaway

“44070 is at its impeccable best during the original compositions of the band’s guitarist Brett Lee Feldman. A Day With Paula May, for example, presents a complex ramble through the enduring excitement of gypsy jazz whilst the adorably sweet Messalina, with its restless rhythms and Eli Bishop’s intoxicating violin lines, lends the album some of its finest moments. It’s very finest moment, however, comes right at the beginning; 44070 / Song for Vrba, the album’s opening track, is both a moving and exhilarating Feldman original that celebrates the story of Rudolph Vrba whose escape from Auschwitz in 1944 and subsequent writing of a detailed report on the mass murders at the concentration camp led to the saving of over 200,000 lives. The track, like its subject matter, is nothing less than spellbinding.”
– Northern Sky Magazine Review – September 2017

Brett Feldman who proved to be not only a most gifted guitarist but also a keen wit joked with the audience before turning to guitarist and vocalist Jeremy Frantz for a stirring interpretation of  “Georgia’ on my Mind.”  Mr. Frantz has an intriguing tenor-like range with a strong and clear tone that recalls songsters from the swing era the group seems to embrace so agreeably.

Each tune seemed to further enchant the crowd and  the audience responded to the music, the magnificent musicianship, and the infectious energy the group seemed to amplify as the evening progressed. Polite applause turned into cries of approval from the crowd, significant swinging to the beat and even a couple who were inspired enough to take to the dance floor.   – Concert Review, Near North Now

Occidental Gypsy has an original approach to gypsy jazz that pays homage to Django and expands the genre to include elements of western (Occidental) sounds, including blues, Klezmer and Latin. The east-coast quintet features Eli Bishop on violin.  Bishop performs regularly at Lincoln Center, and enthralls audiences as the current Guinness Book of World Records fastest clapper.

For over a dozen years, Occidental Gypsy has been pioneering this exhilarating blend of gypsy swing, jazz and world music that enraptures the listener with a complex acoustic sound, burnished by smooth vocals reminiscent of the first era of swing. Their energetic shows make audiences move their feet and have garnered them the title “rock stars with acoustic guitars.”